In this weekend’s blogpost, I would like to share how I rock outerwear (again). Perhaps, I have shared about how I rock my no-sleeve outerwear but this one is actually one of my favorite outfits which also suit for college or casual day out!

To me, outerwear is a piece of clothing that could embellish the casualty of my outfit. Imagine a girl wears a white shirt and jeans only, but when she puts an any kind of outerwear, her style has somehow been improved. And that’s why I am truly fond of this piece of clothing.

So, I went for lunch with friends last week. I had no idea what to wear since I didn’t have many clothes in my luggage. I kept searching and thinking about what I should wear that day. I only found a loose black tank top, loose black trouser and a knit brown outerwear. Since that discovery, I matched them into one outfit.

The combination of tank top and trouser are from Cotton On (tank-top) and Colorbox (trouser). The knit outerwear that I am wearing is from H&M and the flat-shoes that I am fond of is by mango. Because I was a little bored with sling bags, I decided to wear pouch bag that I got somewhere in Penang, Malaysia. For the accessories, I only wore a watch by Alba and those cuty-tiny bracelets that you could get for 1$ – 3$ each at Cotton On.

That’s how my discovery went by when I was running out of clothes in luggage, I hope this blog-post is inspiring enough for your inspiration in dressing up. Have a great weekend! 🙂

Green is the color between blue and yellow.
And I am a creature between the grown leaves on the wall and the paving block.

In this weekend’s blog-post, I wanted to share how I usually create my own hijab style.

People might call me with an ‘outer-person’. Because that’s how I rock my style since I have decided to wear hijab. It has been a year to me for wearing hijab where all of my skins are covered up with cloth. The reason why I like wearing outerwear (ex: jackets, sweaters, hoodies, blazers, coats, etc) because I think a woman can wear anything they want as long as the clothes they wear don’t really fit their shape of body. Although some people say that wearing outerwear is complicated and uncomfy but to me, it describes me.

Processed with VSCO with hb2 preset

Processed with VSCO with hb2 preset

P stands for preferential because you are special.

In this picture, it might look like I am wearing a jumpsuit but actually not. It is a separated outfit where I’m wearing long black top by The Executive and a long loose trouser by Colorbox. And for the glasses, I am wearing Le Specs. It is currently my favorite one. 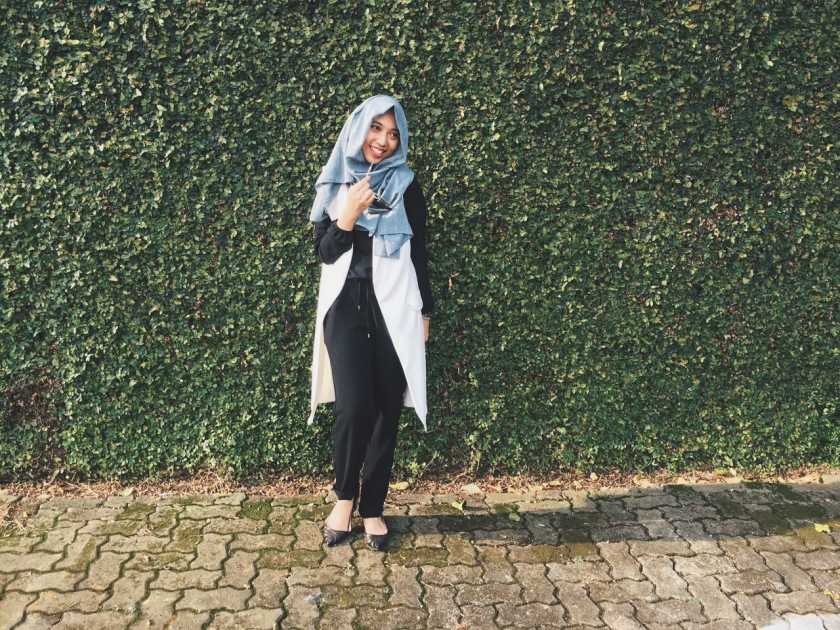 And for the outer, I am wearing white outerwear by New Look. And for the flat-shoes by Mango.

That’s all for today’s blog-post! I hope my look for this weekend could inspire your style in wearing hijab. I am an outer-person, what about you? 🙂

“A Man in White Collar” is now AVAILABLE on WATTPAD! Follow @lefleurnoire and keep yourself updated with Lou’s adventure in finding out the man in white collar.

This time, I want to share something personal that I never thought it would happen to me. It’s a brand new day that could lead you to something that you never expected before.

And it happened to me.

That brand new day has affected my mind, my soul, my everything. I never thought that idea would pop up on my mind that easy. It came just like that. It happened after I had had sahoor on the first week of Ramadan. I was about to sleep after dawn prayer but there was something on my mind that I couldn’t stop thinking about.

“I want to start wearing hijab.”

I’m a muslim but I was a non-hijabi. I hated wearing clothes with long sleeves and wearing scarfs around my head, it just felt uncomfortable and stifling. And I also thought that I would only start to wear hijab if my morals are good in islamic way or the day after I get married. Those are the reasons why I didn’t want to wear hijab in the first place.

That thought kept spinning around my head. I got out of bed and took my laptop. I went on google and youtube to know more about hijab. There was one thing I was kinda scared of wearing hijab, the job requirement. I want to be a career woman, I’ve seen a lot of articles saying that women with scarf on their heads likely to not be accepted in a company. Especially in a company that affiliates with international companies around the world. I’ve always wanted to work in an international magazine, such as Vogue, People, New York Times, etc. I was a lil bit pissed, scared and flustered at the same time.

I googled some cases about discrimination towards hijabis in the workplace. Then there’s one case that could convince me more to wear hijab, a US Muslim who wins hijab case against Abercrombie & Fitch. But then again, I should’ve believed that everything comes from Allah and so is the fate that I’ll have in future. I should’ve not been that worried.

Second confusion is, mostly my clothes are short sleeves and body fit. And hijab clothes are 180 degrees different with the clothes that I had been wearing. I was like, “Oh bloody hell, I don’t know what to wear. I’ll just go naked. Okay”. Not literally, I was joking. I went on youtube and saw some youtubers with stylish hijab for college on daily basis. I started falling in love with hijab, I want to look different in a catchy way. By wearing hijab doesn’t mean you have to look strict like a terrorist. Just like what Angelina Jolie ‘Maleficent’ says on Kids Choice Award 2015, “Different is beautiful”.

After all various researches and considerations, I decided to wear hijab. I decided to cover up my body and by wearing hijab, it has made me realize that I have to control everything I do. And I’ve felt the difference,

I had been being a non-hijabi for 17 years 6 months. I had been showing my body parts that I should have concealed in the first place. When I wasn’t wearing headscarf or anything that cover up my whole body, I felt unprotected. I often found men staring at me with fuck-me eyes and stuff, I often got catcalled, being commented physically, being checked on by people from head to toe. That was all very annoying.

Then the day I started wearing hijab has come, I barely found men staring me at with that kind of stare anymore. I’m feeling protected and tend to keeping myself away from bad things because I’m wearing something that symbolizes my religion. Wearing hijab is not a symbol as a feminist, hijab is a shield for women in any cases.

And there’s one thing that I find it interesting on women who wear hijab, their future husband must be the luckiest guy alive because he’s the only person who knows how his wife look like beneath her hijab. I’m not saying that men who marry non-hijabis unlucky, but if you still have a chance to try hijab, why not now? I used to think that I would only start to wear hijab if I’ve finally found the one. But I’ve changed that mindset, if I want a different result, I have to make a change. I hope this good start will lead me to something which is good for my life. But I believe it will.

I hope my experience will inspire you to wear hijab and this is the decision that I’ve made to face this world (which is full of insanity). Although I’m still learning how to wear hijab properly, I’m hoping that I will never try to take it off or get myself influenced by negative circumstances to take it off. I have a belief system that asks me to cover up my body, I have a very high expectation that there’ll be no more discrimination against women with headscarf. We’re all the same, we’re human being, we have hearts, we have feelings, why hurting each other?